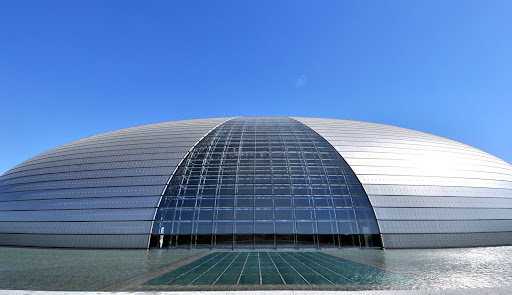 [[National Center for the Performing Arts in Bejing. ONJ will perform Shut Up & Dance here next week. On June 4th, they will be appearing to perform SU&D at the Jazzdor Festival in Berlin.]]

O DREARY NORTHEAST, can it really be all of two weeks until summer starts? As this interim weekend approaches–call it Almost But Not Quite Memorial Day Weekend–we’re pleased to remind you that Claudia Quintet is back to tide us over. For those of you nearest to Boston, Claudia appears at Lilypad on Friday, May 20 at 9pm. Tickets are gettable here. For those of you nearest to New York, you can hear Claudia perform new work by John written especially for The 10th Look & Listen Festival, a new stalwart enterprise hosted by select superheroes of public radio. Claudia performs with Theo Bleckmann as part of a rich concert program at The Chelsea Art Museum on Saturday, May 21st at 8pm. The concert will be followed by a chocolate and champagne reception hosted by Terrence McKnight. Tickets here. This, we trust, will be exactly what’s needed to survive until the end-of-May 3-day magic takes hold and summer begins proper.

IN OTHER NEWS: The John Hollenbeck Musical Empire has insinuated itself into nominations for the 2011 Jazz Journalist’s Association Awards in not one but two categories. JHLE is up for Large Ensemble of the Year and John himself is up for Composer of the Year. You can see the full list of nominees here. The (doubtless star-studded) awards gala will be held on June 11th in New York City. Anyone figure out who constitutes the voting body, let us know and we’ll begin directing our considerable bribery resources accordingly.

LASTLY, A TREAT:  A selection from John’s latest Tree Series, which premiered at the Kimmel Center in Philadelphia last month, is now available to be viewed online. To refresh: For this piece, JH drew inspiration from the early twentieth century painting series of same name by Piet Mondrian. From The Kimmel Center:

Tree Series…shows an evolution from representational art to his spiritual, geometric abstractions that the world would fall in love with. The program also features faculty and students from the Schools of Dance and Music at the University of the Arts in Stravinsky’s Ebony Concerto and with with forces from the University of Delaware on George Antheil’s percussion ensemble work Ballet Mécanique.

The piece is performed here by the University of the Arts Big Band. Check it out:

These words have been brought to you by Jacques Swartz, Chronicler of John, to whom John has relegated all duties pertaining to web PR and general online upkeep. Jacques would like to reaffirm for all interested parties that he is not, in fact, Mr. John Hollenbeck, nor is he Mr. Hollenbeck’s imaginary alter-ego, but rather a fully discrete being in his own right. All queries, complaints, kind remarks and general feedback regarding this blog may be directed to Jacques at johnhollenwebpr@gmail.com